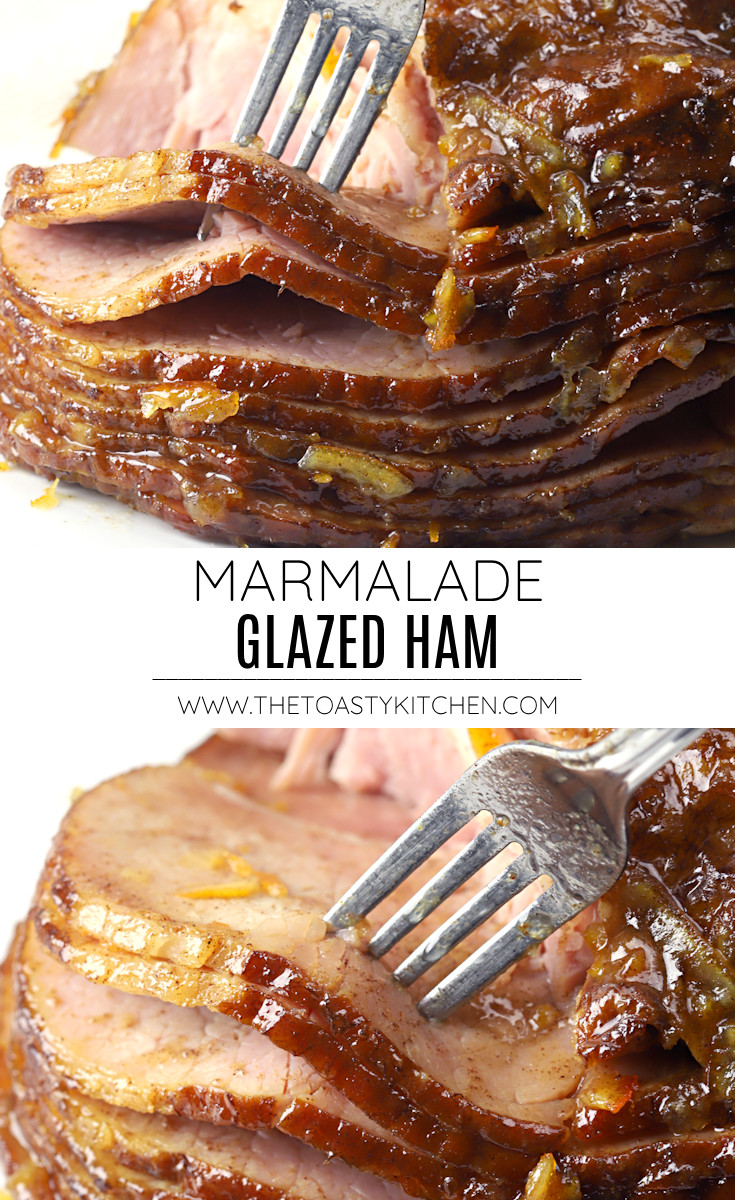 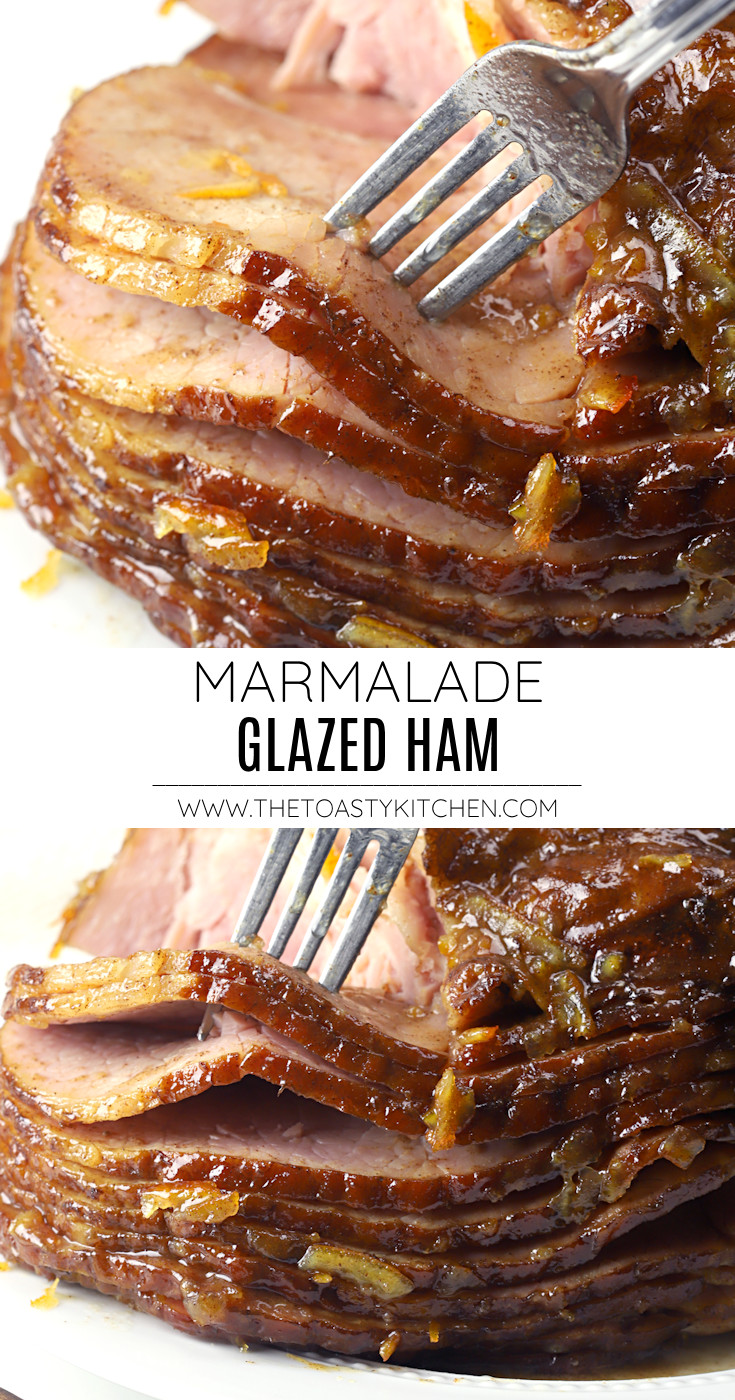 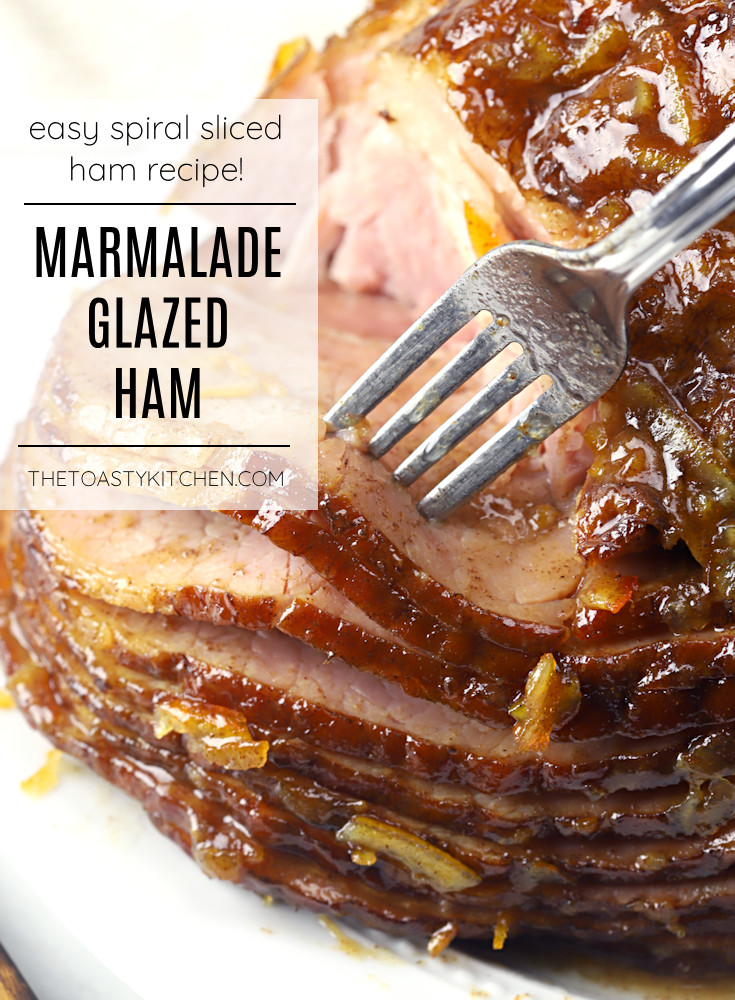 Marmalade glazed ham is the perfect main course for your next holiday meal. Spiral sliced ham is coated in a sweet and tangy orange marmalade glaze with a hint of cinnamon.

A beautiful glazed spiral ham is the centerpiece of any holiday meal. From Thanksgiving to Easter, ham is sure to be the family's favorite choice for your next gathering!

Buying a spiral sliced ham makes this recipe easier than ever to make and serve. There's very little prep work involved! While your ham roasts in the oven, you'll prepare a simple, no cook glaze.

Orange marmalade adds a fresh and bright citrus flavor to your ham. Paired with comforting flavors like maple syrup, tangy dijon mustard, and a hint of warm cinnamon, this glaze will be your new favorite!

Serve this marmalade glazed ham at Thanksgiving in lieu of turkey, or for Christmas or Easter paired with a few of your favorite side dishes (I recommend a batch of creamy baked mac and cheese!).

For this recipe, you'll need one 8-10 pound cured, bone-in, spiral-sliced ham. This recipe will also work with an unsliced ham, but a spiral sliced ham will save you a lot of time and effort! See my section below for a full rundown on different types of ham.

Orange marmalade can be substituted with a similar flavor of jam or preserves, like apricot or pineapple jam.

Maple syrup can be substituted with honey or brown sugar.

There are several types of ham that you're likely to find at your local grocery store. Here are the basics of what to look for when choosing your ham.

What type of pan to use

To cook a ham in the oven, you'll need a roasting pan or a 9x13 baking pan with at least 3 inch tall sides. Choose a pan that your ham will fit comfortably in without touching the sides.

I recommend wrapping your pan in foil before adding your ham to minimize cleanup afterwards.

How much ham to serve

For a bone-in ham, prepare ¾ pound of ham per person attending.

It is always best to err on the side of caution and buy a slightly larger ham than you think you'll need. Ham makes an excellent leftover and extras can be sent home with your guests!

What to serve with ham

Orange marmalade glazed ham makes an excellent main dish to accompany your favorite sides. Here are my favorite side dishes to pair with ham: 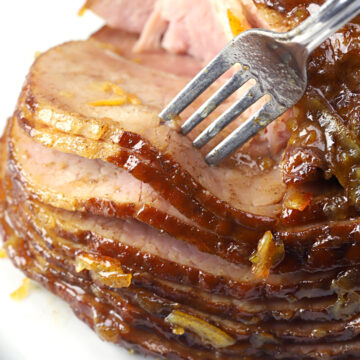