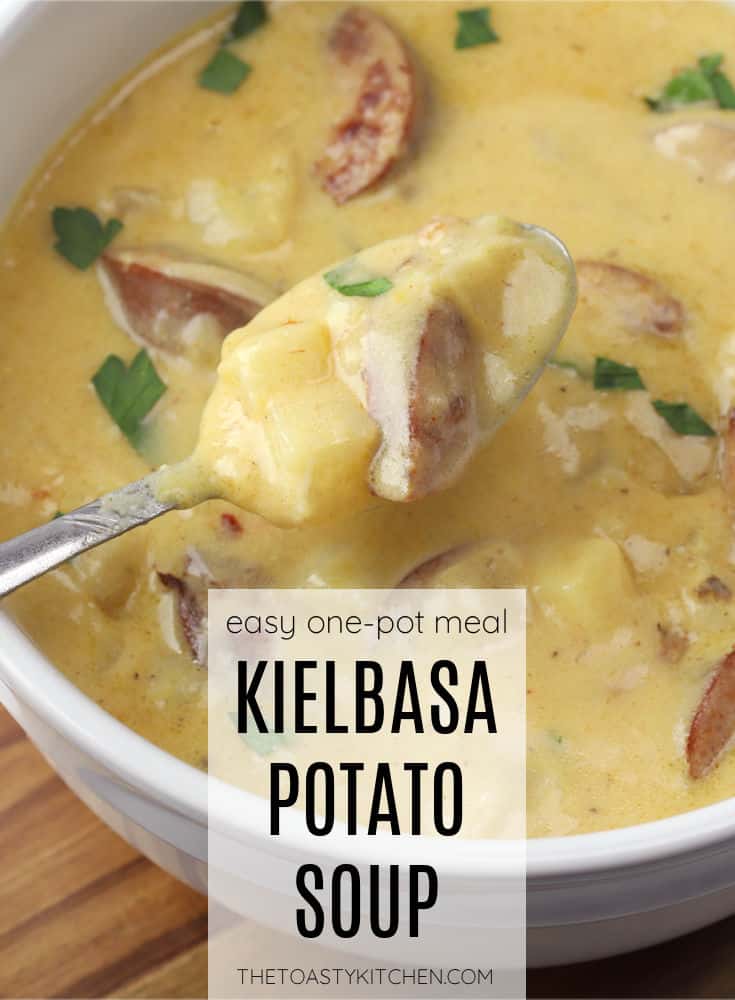 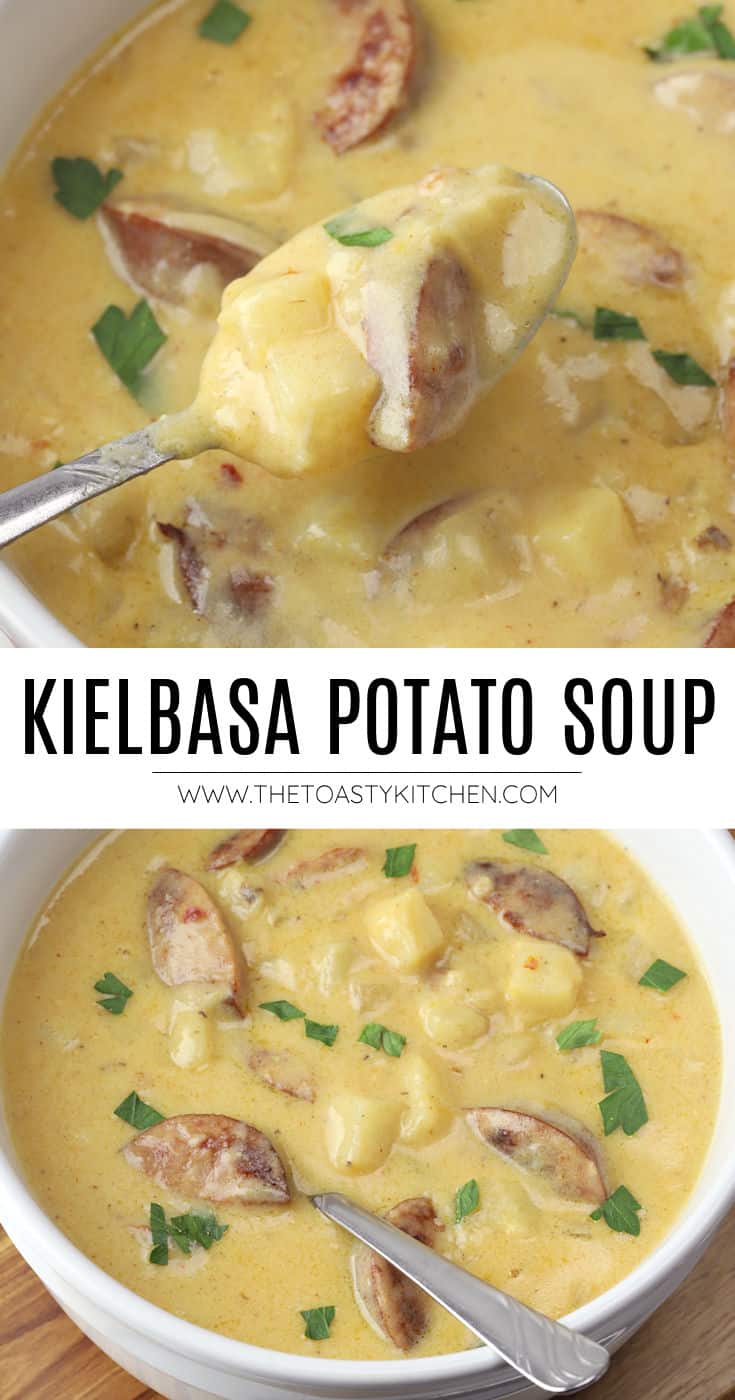 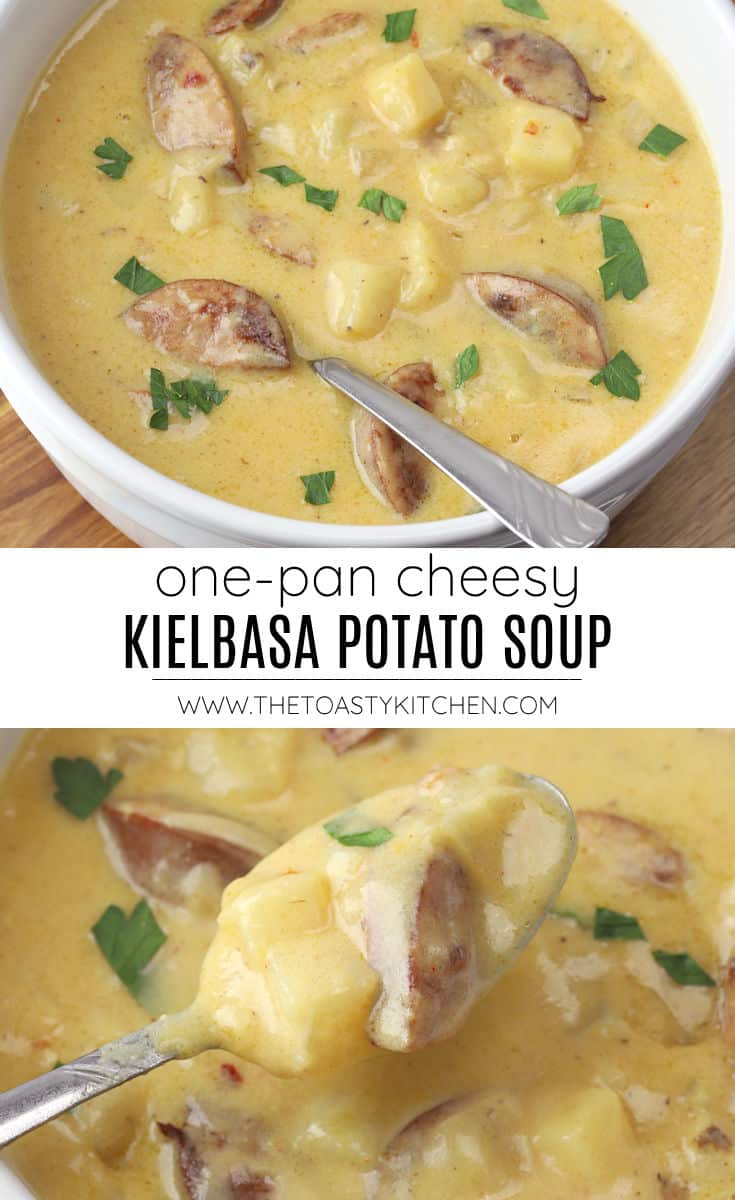 Kielbasa potato soup is a hearty soup filled with sausage, potatoes, and shredded cheddar cheese. Pair this creamy, comforting soup with some crusty bread or a side salad for a quick and filling weeknight meal.

I'm all about creamy, comforting, and hearty meals during the fall and winter months. This one-pot kielbasa potato soup really hits the spot when it's cold outside!

Sliced kielbasa, onion, and garlic are sautéed before making a simple creamy soup base with chicken broth, milk, and shredded cheddar cheese. Frozen cubed hash browns are the secret, time-saving ingredient in this recipe. This soup comes together in 30 minutes or less in a single pot!

Serve kielbasa potato soup with some crusty bread, homemade biscuits, or a simple side salad (like this kale cranberry salad).

What kind of potatoes to use

If you'd like to dice up your own potatoes, I recommend yukon gold, red, or russet potatoes. Any of these will do well in a creamy potato soup. Keep in mind that the larger you dice your potatoes, the longer they'll take to cook.

Frozen hash browns take about 8 to 10 minutes to cook through. Fresh potatoes take a similar amount of time, but will depend entirely on how small you've diced your potatoes.

Keep an eye on your soup while it cooks and don't rely on time alone. Stovetops all run at slightly different temperatures, so the time that works for me may not be right for you.

Try piercing a potato through with a fork - if it pierces through easily, your potatoes are done. If you're met with a bit of resistance, your potatoes need more time.

Why isn't my soup thickening?

This soup is thickened by making a roux with the oil/grease in the pan and flour. Flour is whisked into the grease to make a paste, cooked for a minute, then whisked with the broth and milk. Omitting the roux will result in a thin soup.

The type of milk used in your soup will also determine how thick your soup turns out. I recommend using whole milk or half & half for a creamy, thick soup. Using thinner milks, like 1% or skim milk, will result in a thinner soup.

If you've accidentally added too much liquid, this will also result in a thin soup. To thicken soup, try making a slurry of cornstarch and water, then whisking into your soup.

What to serve with kielbasa potato soup

Kielbasa makes a hearty meal on its own, topped with your favorite soup toppings, or alongside a small side dish. Here are my favorite things to pair with potato soup: 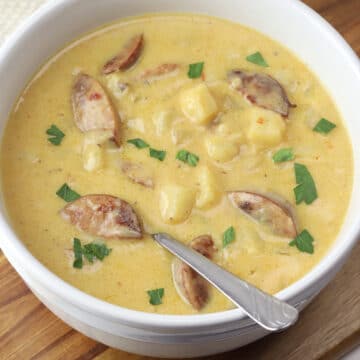