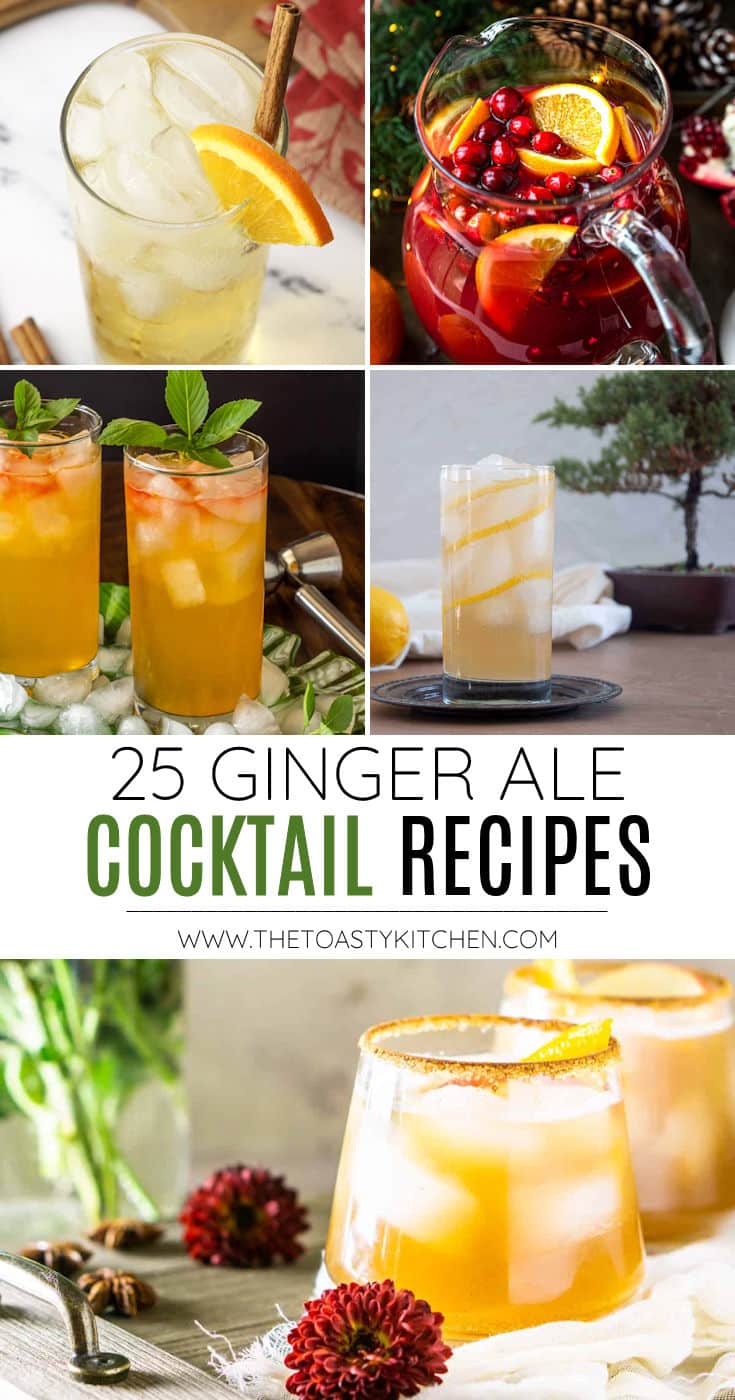 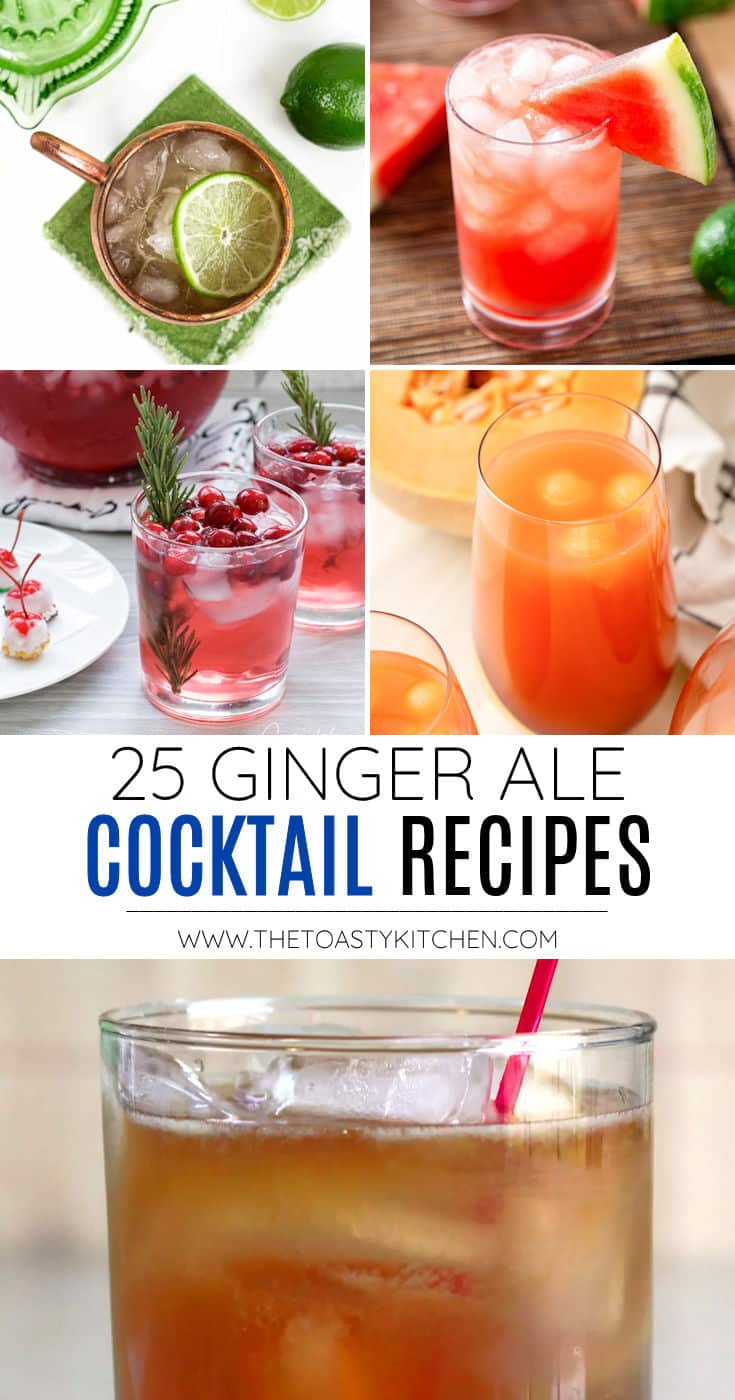 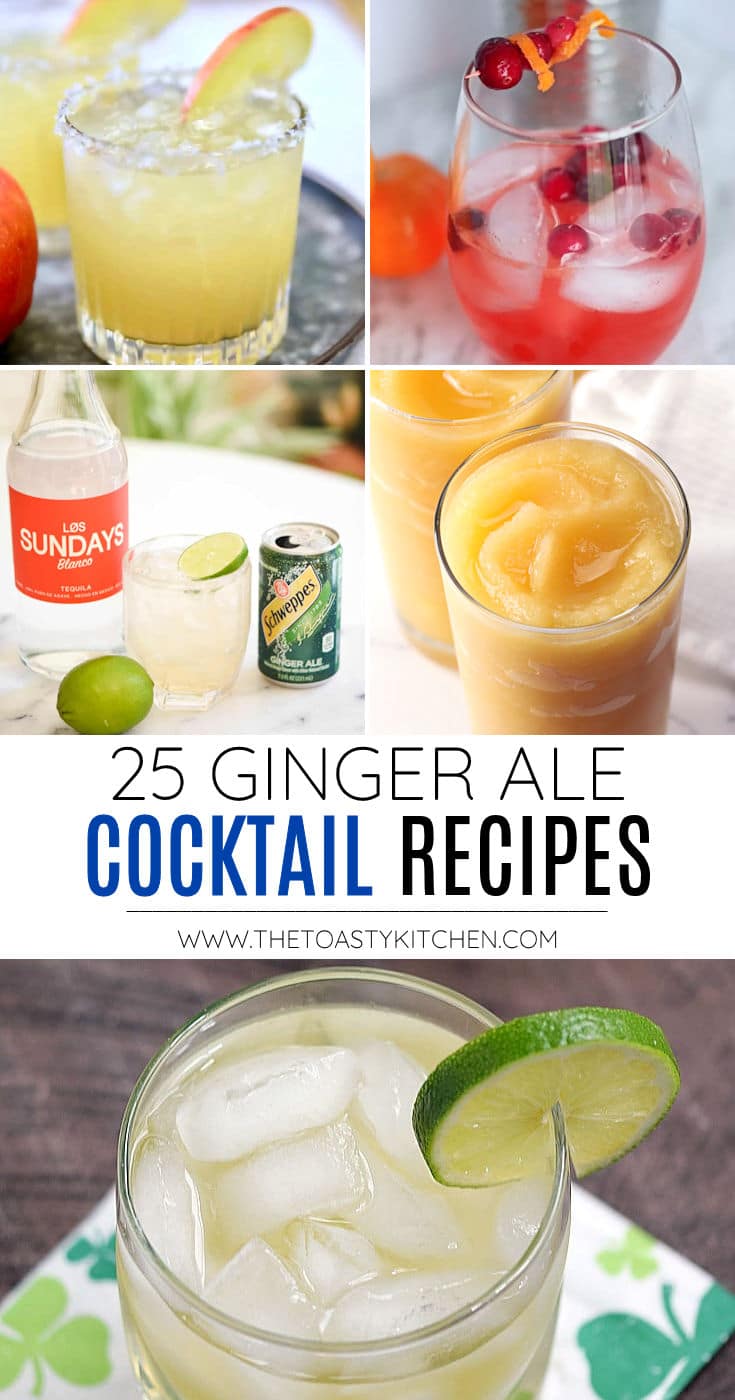 Today I'm sharing 25 ginger ale cocktails that are easy to mix up in your own home. If you love the refreshing, bubbly, lightly spiced flavor of ginger ale, you're sure to find a new favorite cocktail on this list.

Ginger ale is a carbonated beverage that's lightly sweetened with a mild ginger flavor. It's a popular beverage for settling an upset stomach, as well as being used as a mixer for alcoholic drinks.

Did you know that ginger ale can also be used in stage performances as a stand-in for alcohol, like champagne and beer? Since it's carbonated and has a similar color, it makes an easy, inexpensive swap.

Ginger ale is a fantastic mixer to keep on hand because it blends well with just about any alcohol. Try mixing ginger ale with any of these alcohols:

Ginger ale even mixes well with white wine or red wine, like in holiday punch or sangria recipes.

What's the difference between ginger ale and ginger beer? Ginger ale, as we've mentioned, is a carbonated beverage that is non-alcoholic and has a mild, sweet ginger flavor.

Modern day ginger beer is also carbonated and non-alcoholic. The main difference is that ginger beer has a stronger ginger flavor and is usually less sweet than ginger ale.

Despite the names 'ale' and 'beer', neither beverage contains alcohol. Ginger beer did originally contain alcohol (when it was made in the 18th century by fermentation), but through the years became known as the non-alcoholic beverage you can find in stores today.

Can you use ginger ale instead of ginger beer in cocktails?

Ginger ale and ginger beer, in the broad spectrum of carbonated beverages, are fairly similar. They both have ginger flavor and carbonation, with varying levels of sweetness. While not always true, technically you could substitute ginger beer with ginger ale (and vice versa) without ruining a cocktail recipe.

However, I highly suggest reading the recipe and following the substitutions offered by the writer. There are times when ginger beer may add too strong a ginger flavor, or ginger ale would add too much sweetness.

Looking for more cocktail recipes to use up that ginger ale? Look no further! Check out these 25 ginger ale cocktails and find a new drink recipe to share with friends and family (or enjoy for yourself).

This spiced orange ginger ale cocktail is made with ginger ale, a hint of citrus and a kick of cinnamon. Perfect for the holidays, yet light and refreshing.
View Recipe 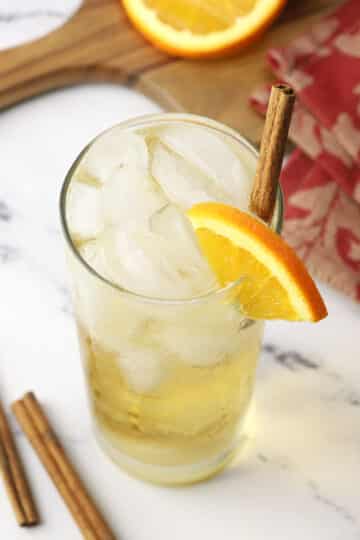 Make a ginger peach vodka slush to cool off this summer! Made with frozen peaches, this frozen cocktail is filled with fruity flavor.
View Recipe 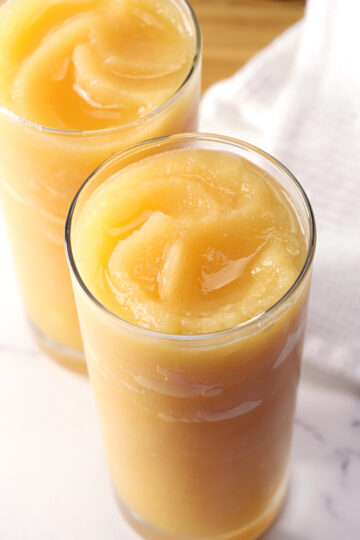 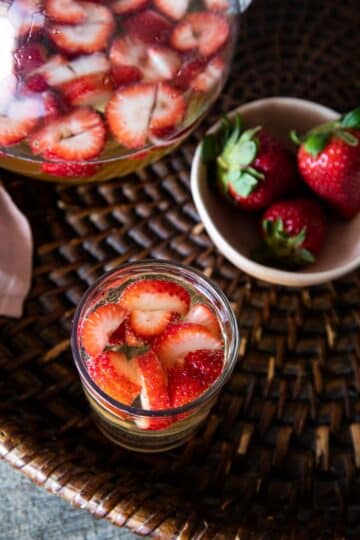 by Miss In The KitchenMake a batch of apple cider margaritas for your next fall party. Made with apple cider, pineapple juice, tequila and ginger ale.
View Recipe 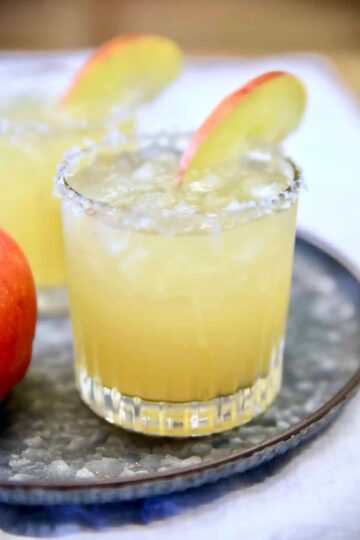 by Mix That DrinkThis grumpy old man cocktail is made with bourbon, ginger ale, and lime juice. Maybe the name comes from the fact that you'll be a little less grumpy after sipping this drink!
View Recipe 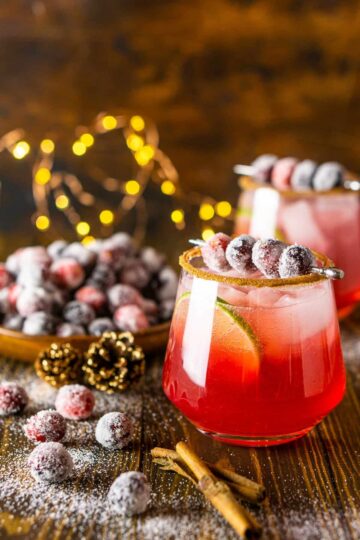 by Beyond Mere SustenanceMake this Chilcano de Maracuya today, it's cool, light, and refreshing - perfect for summer! Made with passionfruit, mint, ginger ale, and pisco (a type of brandy produced in South America).
View Recipe 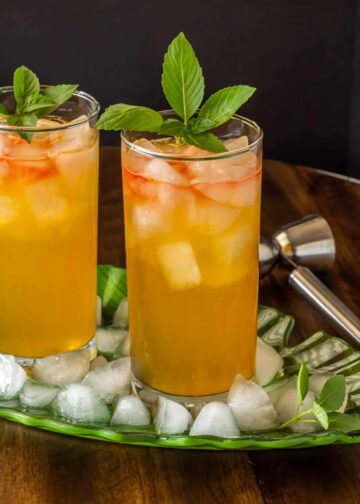 by The Good Hearted WomanThis spiced cranberry mule is made with ginger beer or ginger ale and cranberry vodka. Perfect for the holiday season!
View Recipe 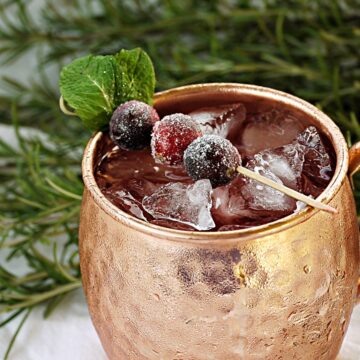 by Occasional CocktailsThis eye catching red cocktail is made with ginger ale, several fruit juices, and vodka. Simple, refreshing, and crisp - and easy to whip up!
View Recipe 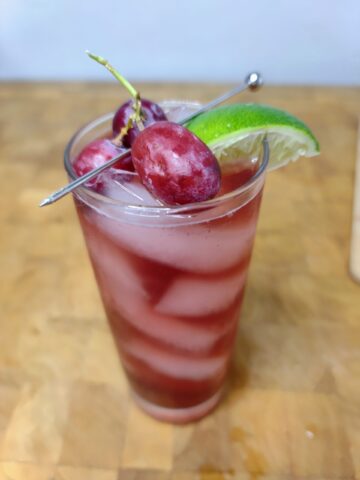 by Family Around The TableBuck cocktails are made with ginger ale, a bit of citrus juice (in this case, lime juice), and your spirit of choice. To make an Irish buck, you'll need some Irish whiskey. Perfect for St. Patrick's Day!
View Recipe 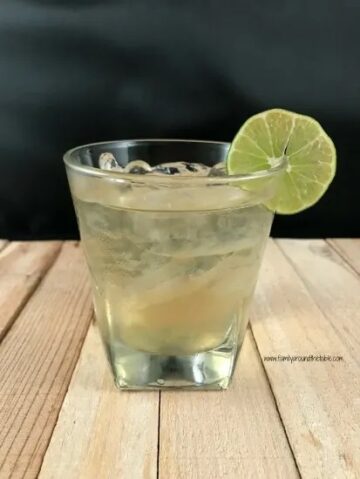 by Mix That DrinkThe naughty gnome gets its name from the gnome mascot of Vernors ginger ale. It's mixed with captain morgan and bitters to make a rich, spiced drink.
View Recipe by Trop RockinCrown royal peach and ginger ale make a refreshing, crisp, and light cocktail that's easy to whip up in a moment's notice. Perfect for summer lounging.
View Recipe by Cooking With CurlsLooking for more cocktails for St. Patrick's Day? Give this Jameson & Ginger a try. It's light and refreshing, with a little kick from the Irish whiskey.
View Recipe 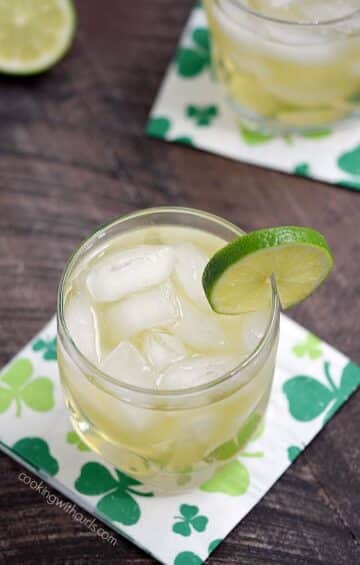 by Feast & WestReminiscent of a Kentucky mule, this refreshing cocktail is made with ginger ale and bourbon. Warm, smooth bourbon is the perfect complement to the lightly spiced ginger ale.
View Recipe 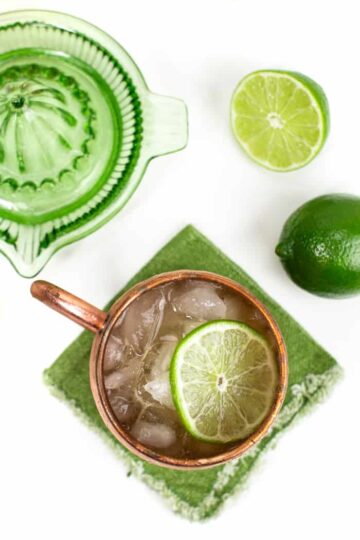 by Ramshackle PantryThis horse's neck cocktail is quite the spectacle with its long lemon peel garnish. Made with brandy and ginger ale, this beverage is great year round but especially refreshing during those hot summer months.
View Recipe 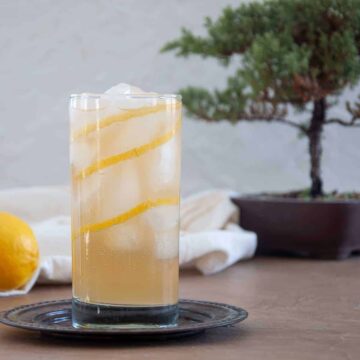 by Mom's DinnerThis Christmas punch recipe is perfect for serving a crowd during the holiday season. Made with your favorite holiday flavors like cranberry, orange, pomegranate, and of course, ginger.
View Recipe 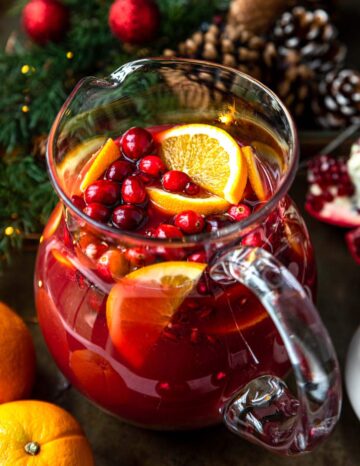 by Burrata and BubblesApple cider, bourbon, and ginger ale will warm you up during those cold winter months. Sip this cocktail fireside, it's sure to put you in good spirits.
View Recipe 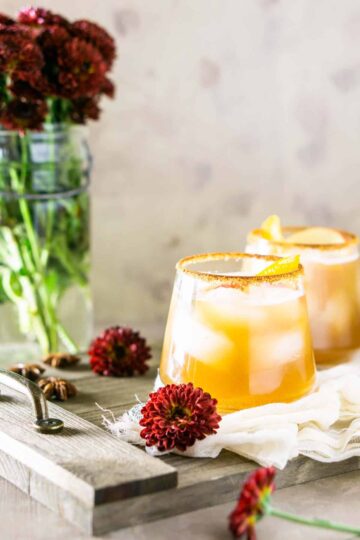 by The Soccer Mom BlogThis peach rum punch is like a fun, grown-up party drink - perfect for your next pool party, picnic, or barbecue. Made with fruit juices, ginger ale, grenadine, and peach rum.
View Recipe 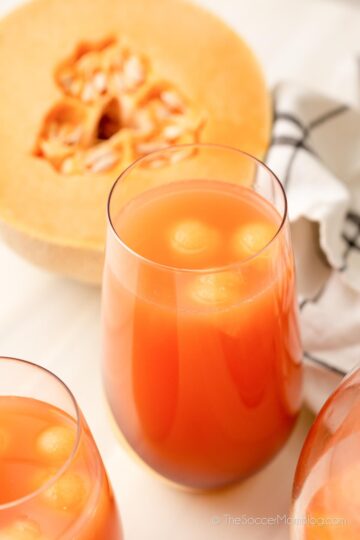 by Sinful KitchenLooking for an eye catching cocktail? Give this ombre blue gin cocktail a try. Perfect for summer parties, dinner cocktails with friends, or sipping poolside.
View Recipe by Cupcakes and CutleryLooking for the simplest and quickest cocktail that's perfect any time of year? Try mixing fireball and ginger ale to make this slightly sweet, spiced cocktail.
View Recipe 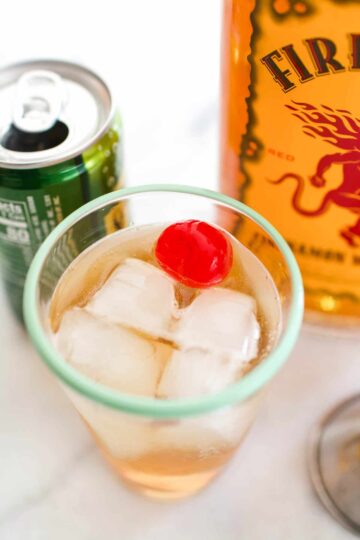 by Amanda's Cookin'Cranberry holiday punch is perfect for Christmas and New Year's Eve parties. Filled with cranberries, pomegranate, ginger ale, prosecco, and more. Garnish with a rosemary sprig to amp up the holiday vibes!
View Recipe 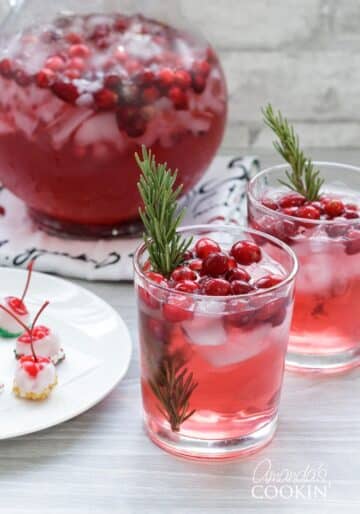 by Baking BeautyIs there anything more refreshing than watermelon on a hot day? This sparkling watermelon cocktail is a must try this summer - it's light and refreshing, and sure to hit the spot.
View Recipe

by Cupcakes and CutleryHave tequila on hand, but don't want to make another margarita? Give tequila and ginger ale a try. It's refreshing and perfect for summer sipping.
View Recipe 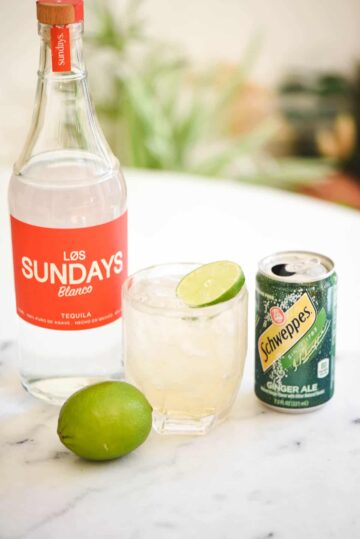 by The Olive Blogger This beautiful clementine cranberry cocktail is not only eye catching but also tastes incredible. Perfect for your next holiday gathering.
View Recipe Did you find a new drink to try on this list? Let us know what you thought in the comments below!