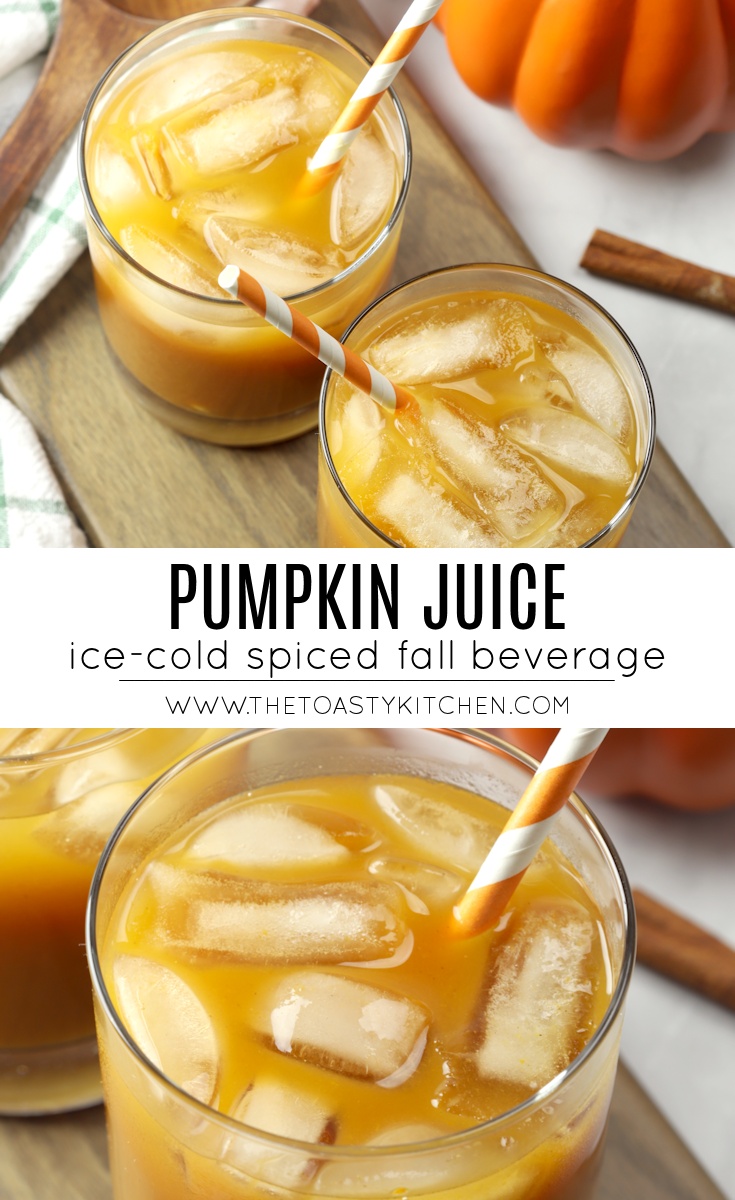 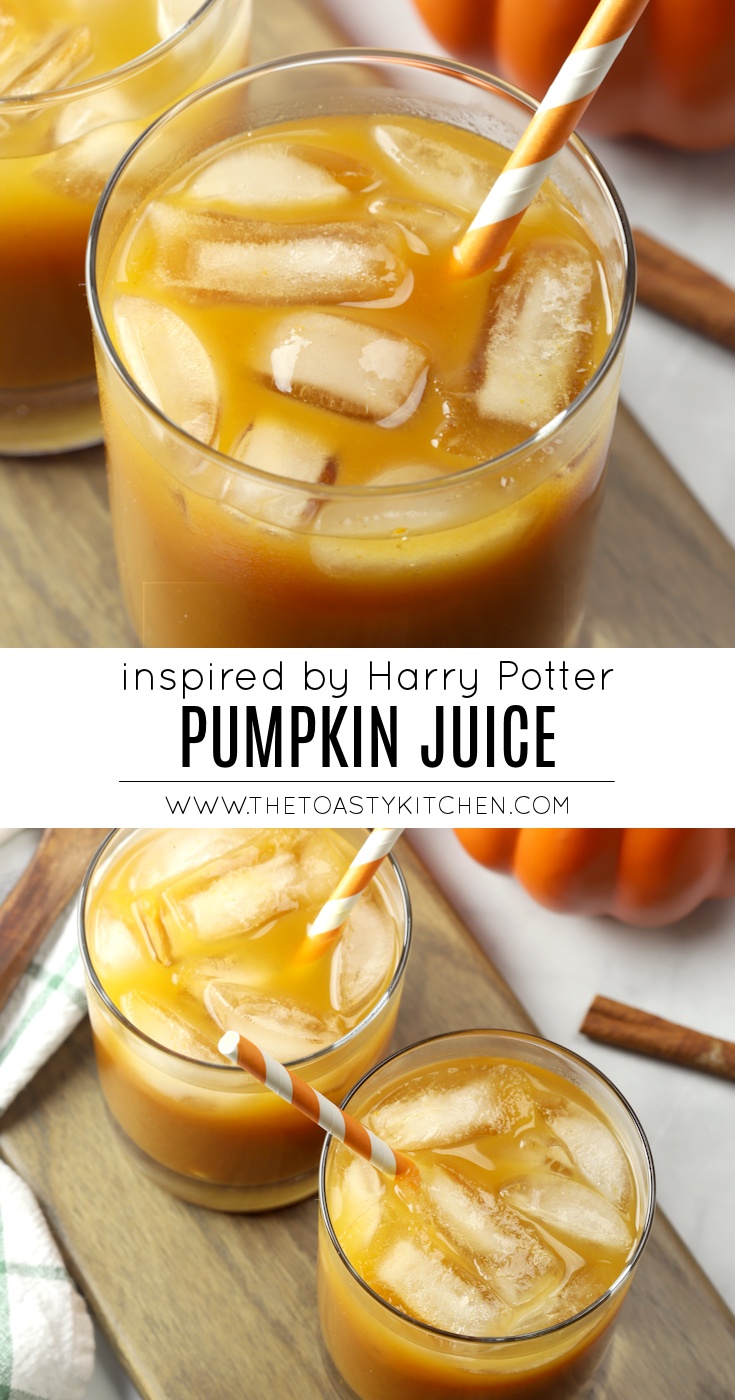 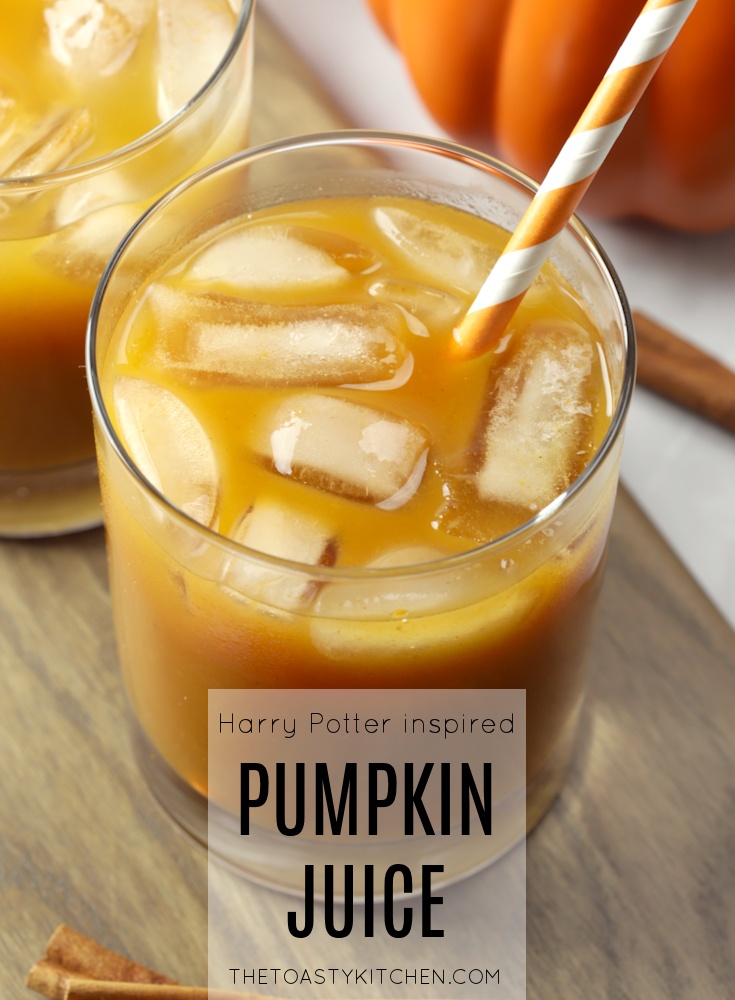 Pumpkin juice is a spiced fruit juice that can be served hot or cold. Lightly spiced apple cider is blended with apricot nectar and pumpkin puree to make this flavorful fall beverage.

You're going to love the fall flavors in this pumpkin juice recipe. It's the perfect cold beverage for fall, with flavors like apple, cinnamon, pumpkin and apricot.

If you're a fan of Harry Potter, you may recognize this as the preferred beverage of Hogwarts School of Witchcraft and Wizardry. In the Harry Potter universe, pumpkin juice is as common as orange juice, and is served at breakfast, lunch, dinner, and special occasion feasts.

Don't let the idea of pumpkin juice scare you off - this flavorful juice is like an amped up apple cider, with just a hint of apricot, pumpkin, and fall spices blended in. This drink is smooth, fruity, and can be served hot or cold!

This recipe makes about ten 8-ounce cups - perfect for your next fall party, Harry Potter themed birthday, or Halloween. Serve alongside my recipe for pumpkin pasties!

Apple cider or apple juice can be used for this recipe. I like the deeper flavors of apple cider, but sometimes it can only be found in the fall months.

Apricot nectar may be the toughest ingredient to find on this list. I found apricot nectar at my local grocer in the juice aisle, and it may be in cans or bottles. If you can't find apricot nectar, peach or pear nectar will also work in a pinch. It may also be labeled as apricot juice.

Cinnamon, ginger, nutmeg, and allspice can be substituted with an equal amount of pumpkin pie spice if you have it on hand.

For this recipe, you'll need a 15 ounce can of pumpkin puree. If you have fresh pumpkin puree on hand, you're welcome to use that instead.

While pumpkin juice was always served cold at Hogwarts and on the Hogwarts Express, this version can also be served warm.

To serve cold, allow it to come to room temperature after cooking, then serve over ice. Keep any leftovers in a pitcher in the refrigerator. This is my preferred method, - the pumpkin flavor really shines when served cold!

To serve hot, serve immediately after cooking. After storing leftovers in the refrigerator, reheat on the stove top over medium heat until hot, then serve.

This recipe was inspired by the beverage frequently mentioned in the Harry Potter fantasy book series. Served like orange juice in the muggle (non-magical) world, it is enjoyed at every meal and is usually served cold.

The only place you can buy pumpkin juice is at Universal Orlando in The Wizarding World of Harry Potter theme park area. While I haven't tried it myself, I think this homemade version is a great alternative! 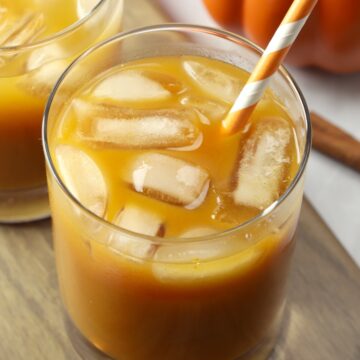