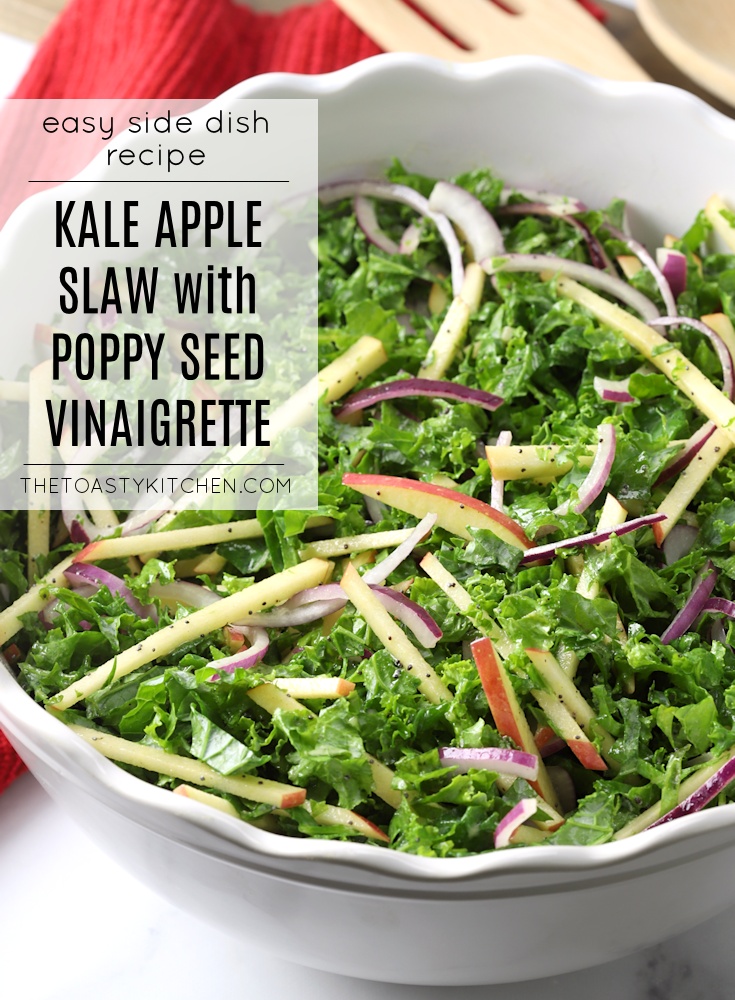 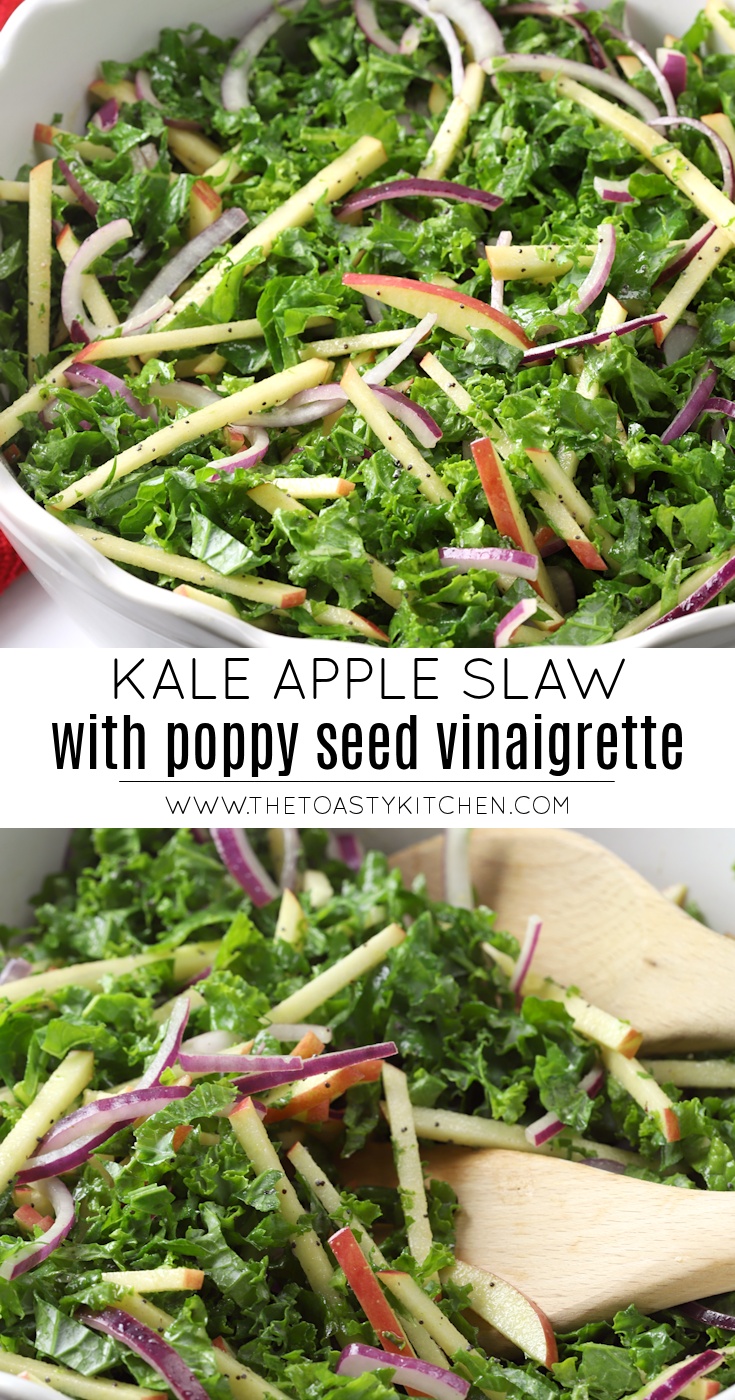 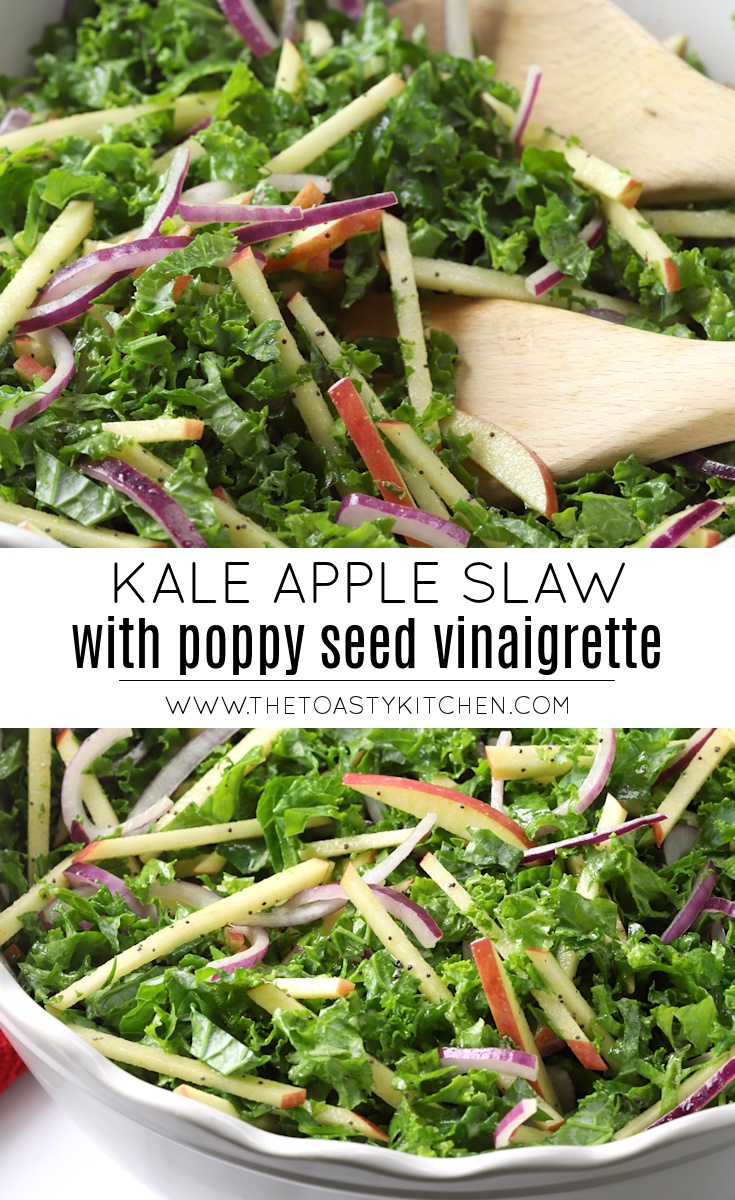 Kale apple slaw with poppy seed vinaigrette is a light vegan side dish recipe that's prepared in minutes. Chopped kale is tossed with sliced apple and red onion, then coated in a tangy poppy seed dressing.

This kale apple slaw is light, refreshing, and filled with healthy, nutrient dense ingredients. Thinly sliced kale, apple, and red onion are the stars of this homemade slaw, which are tossed in a sweet and tangy poppy seed vinaigrette.

Did you know that kale is one of the most nutrient dense foods on the planet? Kale is filled with antioxidants and is an excellent source of Vitamins C, A, and K.

This kale apple slaw is a great way to add more kale to your diet - it's easy to prepare and delicious! The homemade dressing is made with just a handful of easy to find ingredients and is filled with flavor.

Kale is the star of this slaw recipe. You'll need one large bunch of kale, or about 8 ounces.

Any apple will work for this recipe, depending on the flavor you'd like to add to your slaw.

I recommend using a fuji apple for a little extra sweetness to contrast with the earthy flavor of the kale. A granny smith apple would add a tart flavor to your slaw, which pairs well with the homemade vinaigrette.

Maple syrup can be substituted with honey. Keep in mind that this slaw will no longer be considered vegan if you use honey!

Make ahead and storage

Need to make your homemade slaw ahead of time? No problem! This kale apple slaw can be made up to 24 hours in advance and stored in a sealed container in the refrigerator.

Since kale is so hearty, it doesn't wilt quickly after being dressed, making it a great salad to make ahead of time. I find that it is best served within 12 hours (try to make it the morning of an event), but can be made up to a day in advance.

Kale slaw will keep for 2-3 days in the refrigerator, but your apple will slowly begin to brown over time.

How to prepare kale

Kale is a hearty, leafy green, and can be quite tough when not prepared properly.

First, remove any large, tough ribs by slicing down either side of the rib with a knife.

Then, gather your kale into a bundle and slice thinly with a sharp knife, making ¼ inch ribbons. Your kale won't have the exact appearance of a traditional cabbage slaw, but your goal is to chop it as thinly as you can.

Optionally, you can also give your kale a few scrunches with your hands to further tenderize it. I don't find the need to massage my kale for this recipe, but if you'd like a more tender kale, you're welcome to do so. 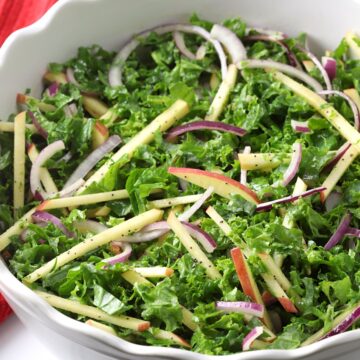