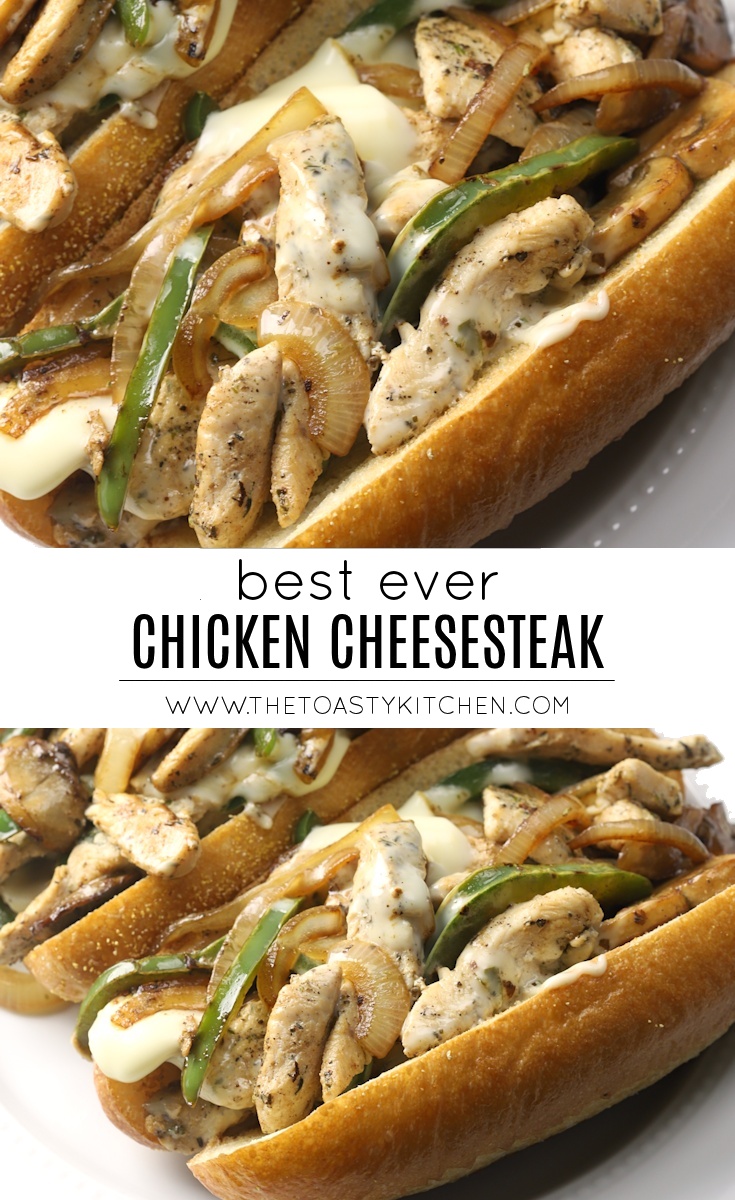 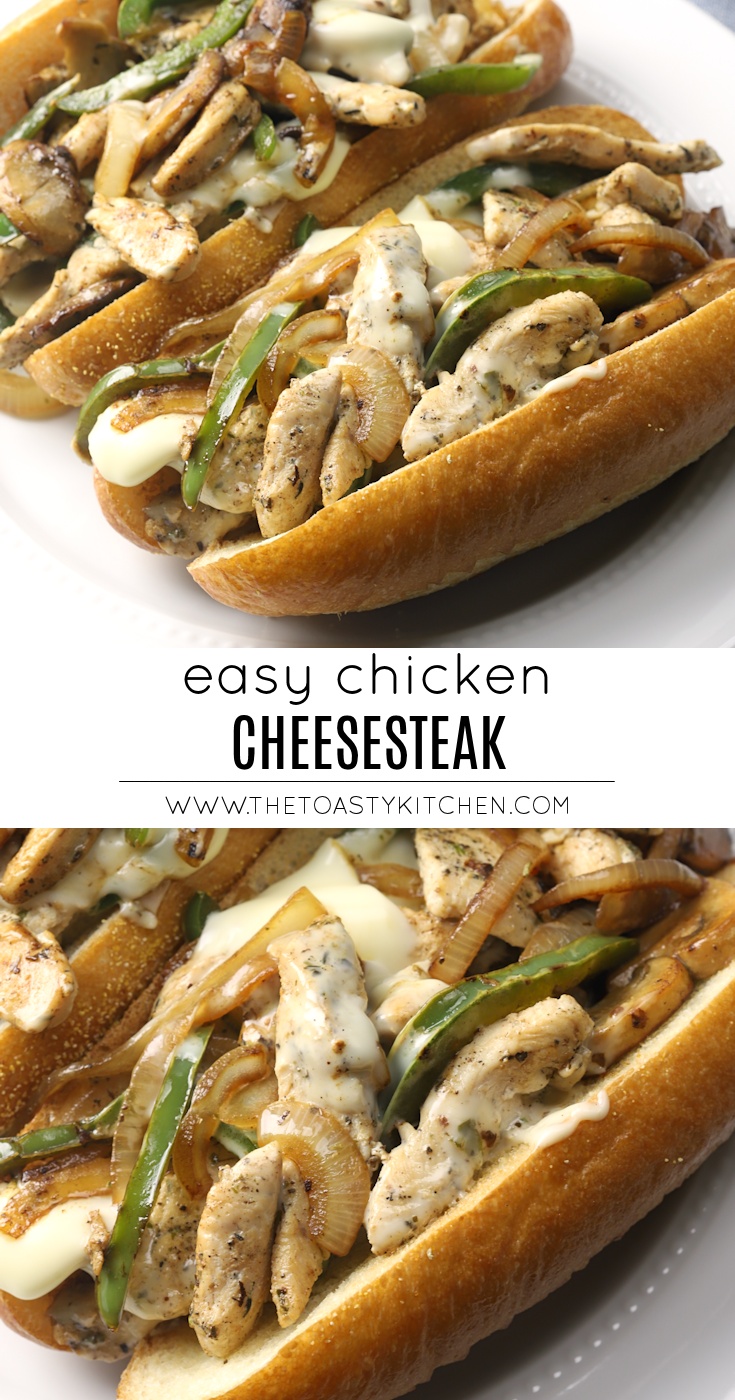 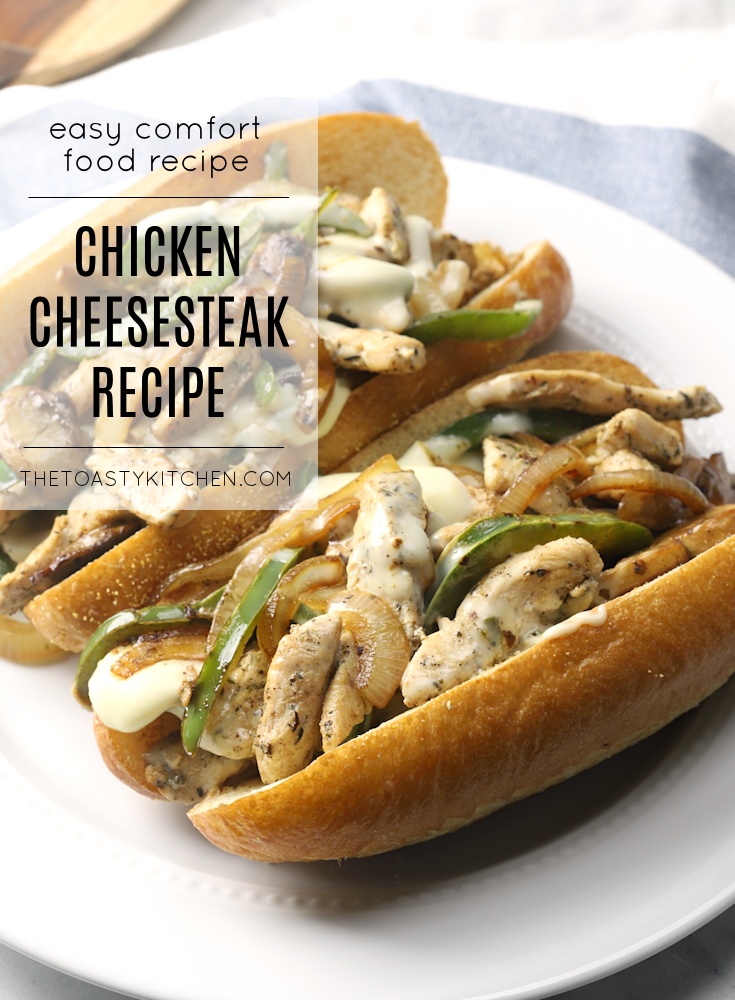 My original best ever cheesesteak recipe has been a fan-favorite for years. I finally decided to make a chicken version - I think you'll love it!

These chicken cheesesteak sandwiches are big, hearty, and filling. Lightly toasted bakery hoagie rolls are filled to the brim with seasoned, tender chicken, melty cheese, and your favorite toppings. Onions are a must, but I suggest adding bell pepper and mushrooms too.

Serve these chicken cheesesteaks anytime you're looking for a comforting, filling, and hearty home cooked meal. They're incredibly easy to make at home. Plus, they come together in about 20 minutes!

The toppings on this sandwich are completely customizable. At the very least, I suggest adding onions. Bell peppers and mushrooms are also popular toppings that I recommend.

I use publix bakery hoagie rolls for my sandwiches, but if you'd like a more traditional option, go for an amoroso roll.

To make an authentic cheesesteak, the only topping to add is onions. In places other than Philadelphia, popular toppings include bell peppers, mushrooms, banana peppers, and sometimes lettuce and tomato.

The great part about recipes are that they're all going to be different and unique. It would be quite a boring world if we all had the exact same recipe for a sandwich, right?

Traditional cheesesteak toppings are as simple as adding onions and cheese to your chicken or steak.

Other popular toppings include bell peppers and mushrooms. If you like these toppings and haven't tried them before on your chicken cheesesteak, I suggest giving them a try! They add great flavor to the sandwich.

If you'd like to make more of a cheesesteak hoagie, you could also add a smear of mayonnaise, as well as shredded lettuce and tomato.

In short - build your sandwich with any toppings that you enjoy!

What is the best cheese for cheesesteak?

My favorite cheese for cheesesteaks is white American cheese. It's salty, melty, and creamy, and adds a great flavor to your cheesesteak sandwiches. I highly suggest giving it a try.

Other popular cheeses include cheese whiz or smoked provolone cheese slices. I recommend adding your favorite - it's your sandwich after all!

Or, slice two sandwiches in half to make four small sandwiches. Then, serve with a side dish or two for a complete meal. 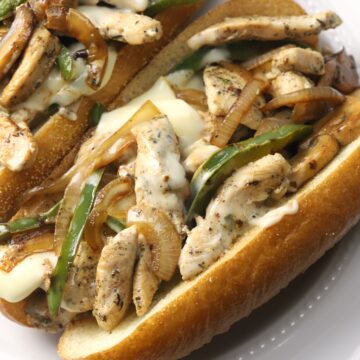