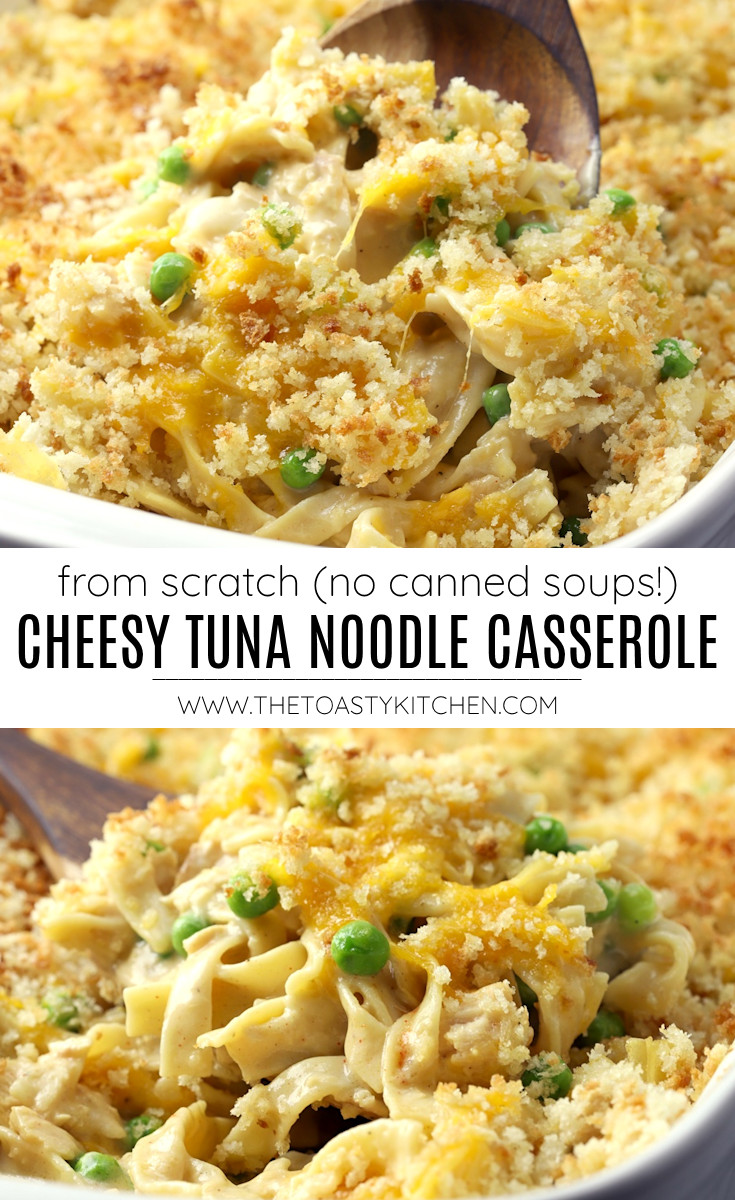 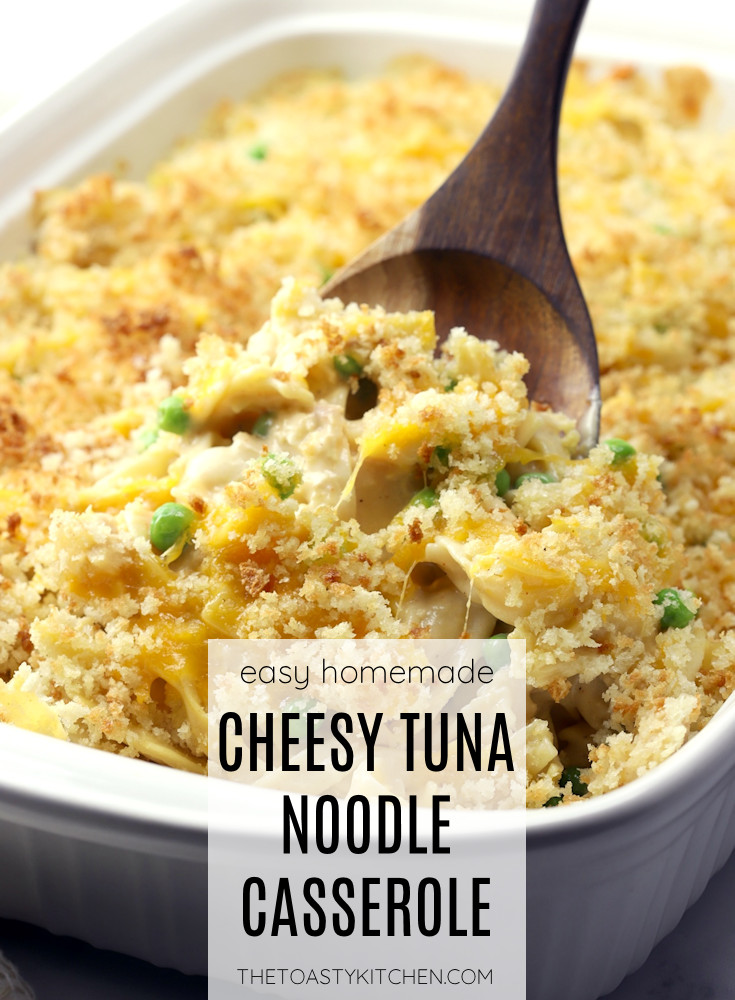 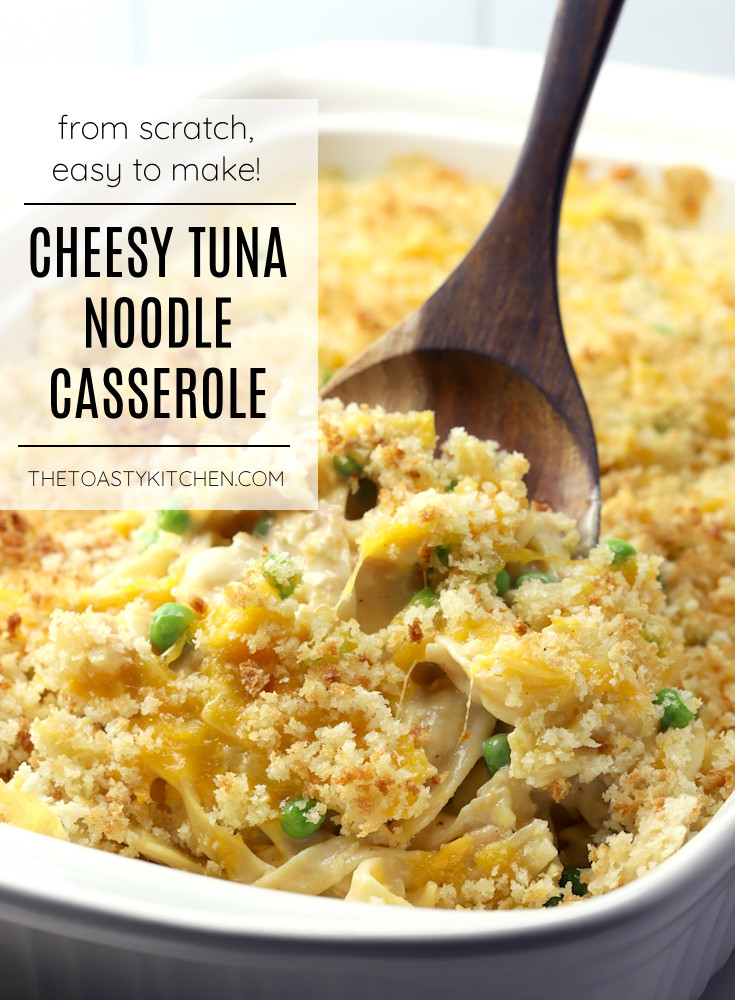 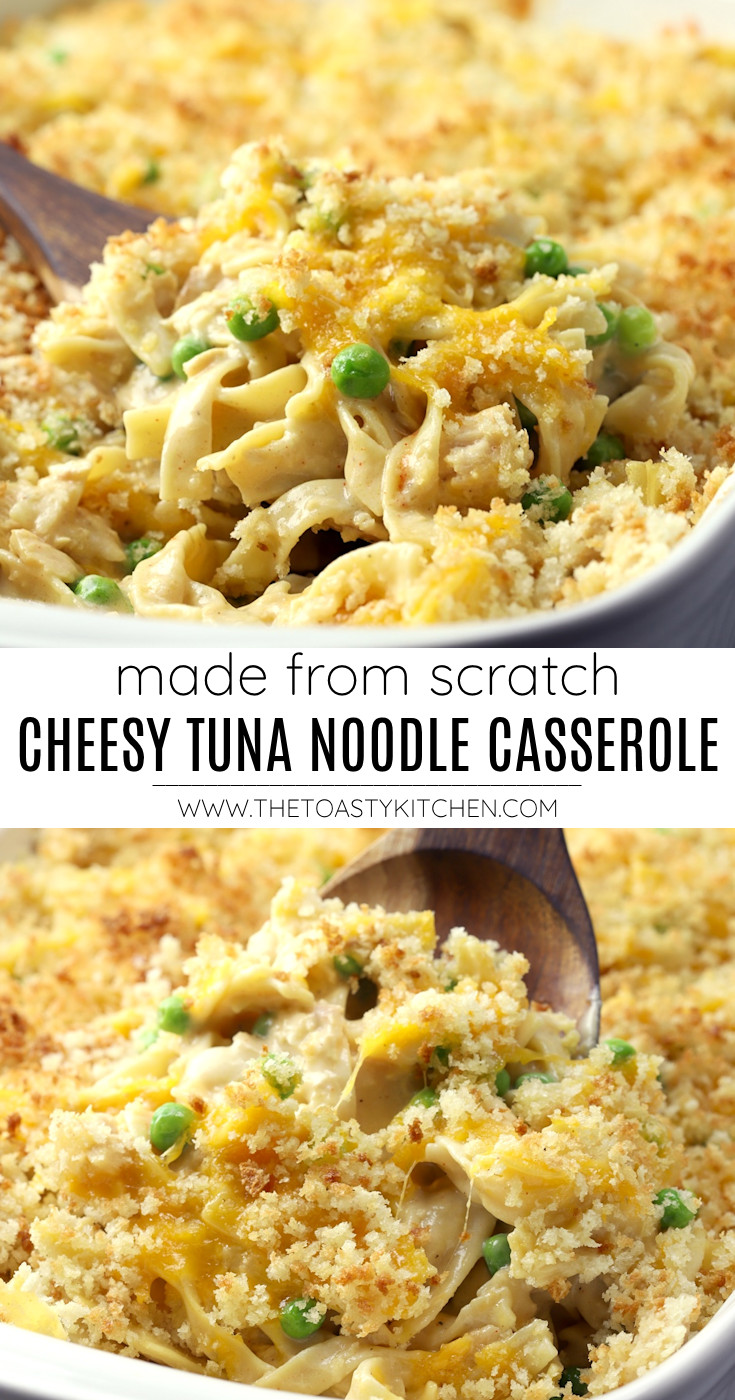 Cheesy tuna noodle casserole is a nostalgic dish made with tuna, egg noodles, and a creamy, homemade sauce. This filling and comforting casserole feeds up to eight and is ready in less than 45 minutes.

Cheesy tuna noodle casserole is a classic American dish that the entire family will love. This homemade casserole is made with egg noodles, canned tuna, peas, and a creamy, made-from-scratch sauce.

This casserole is topped with cheddar cheese and a panko crust for maximum flavor and crunch. No canned soups here - the homemade sauce is flavorful and fresh, a big improvement from the processed stuff!

Serve this cheesy tuna noodle casserole for an easy weeknight meal. It has a mild, creamy flavor that the entire family will enjoy!

Egg noodles can be any size, but I prefer medium. Or, any medium sized pasta will also work. Try using farfalle, shells, or macaroni.

Chicken broth can be substituted with vegetable broth.

Peas can be substituted with any frozen mixed vegetables or fresh frozen corn.

Panko bread crumbs make the best crunchy crust, but can be substituted with traditional bread crumbs or crushed butter crackers (like Ritz brand).

What type of tuna should I use?

For this recipe, I used solid white albacore tuna in water. I like to use this type of tuna for casseroles because the meat has a mild flavor and a texture similar to chicken.

Albacore tuna is light in color and breaks apart into large chunks, so it doesn't get lost in the casserole. The downside of using albacore tuna is that it contains higher mercury levels. Because of this, it's suggested to only consume one serving of albacore tuna per week.

Canned light tuna is another great option, as it is widely available and generally less expensive than albacore tuna. It also contains lower levels of mercury. Light tuna is pink in color, and shreds apart into smaller pieces. It may also have a more distinct 'fishy' flavor.

Tuna can also be substituted with canned chicken or rotisserie chicken instead.

Leftovers reheat well and will last for 2-3 days in the refrigerator, covered in a tightly sealed container.

Dairy based and pasta casseroles generally do not freeze and thaw well, so I do not recommend freezing this recipe. 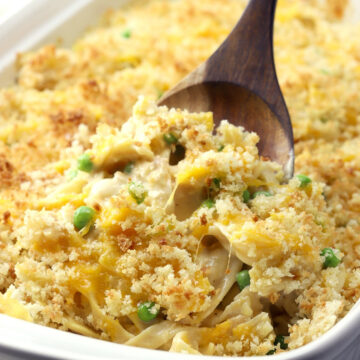