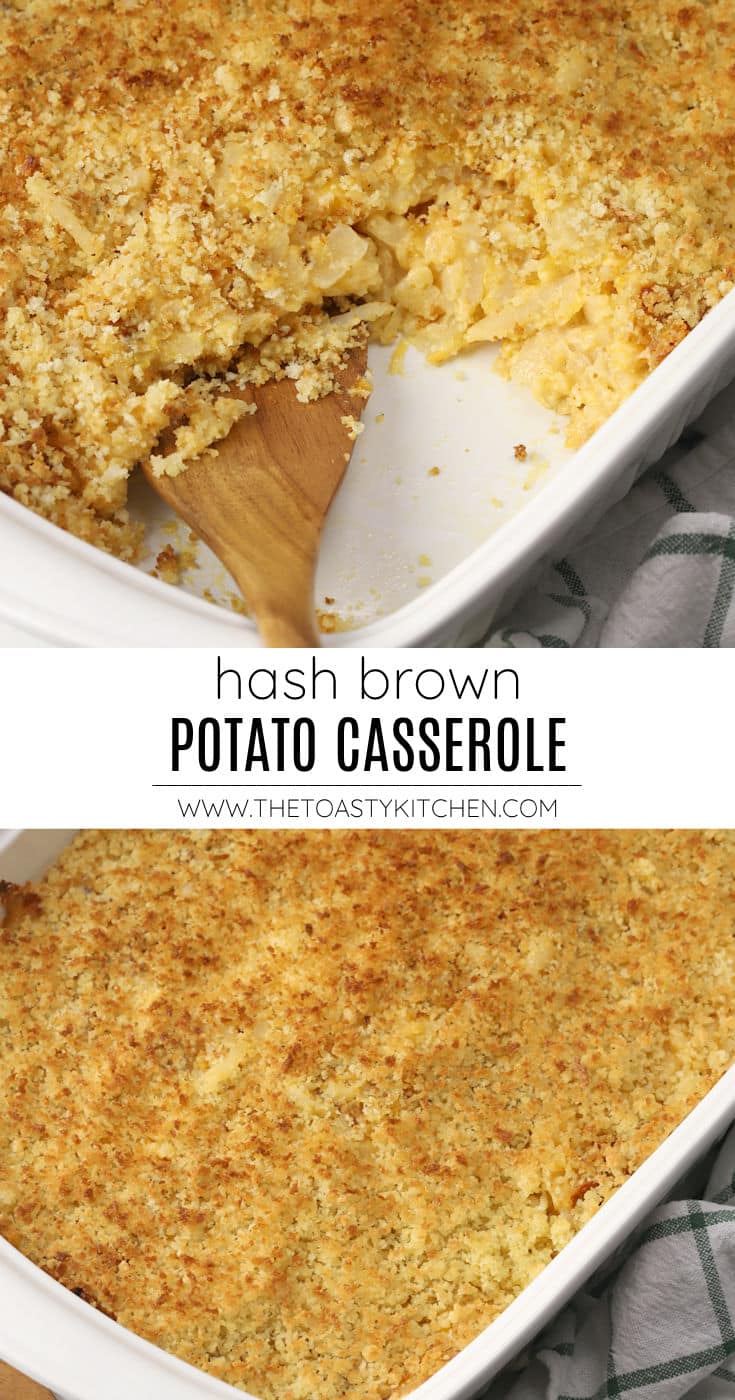 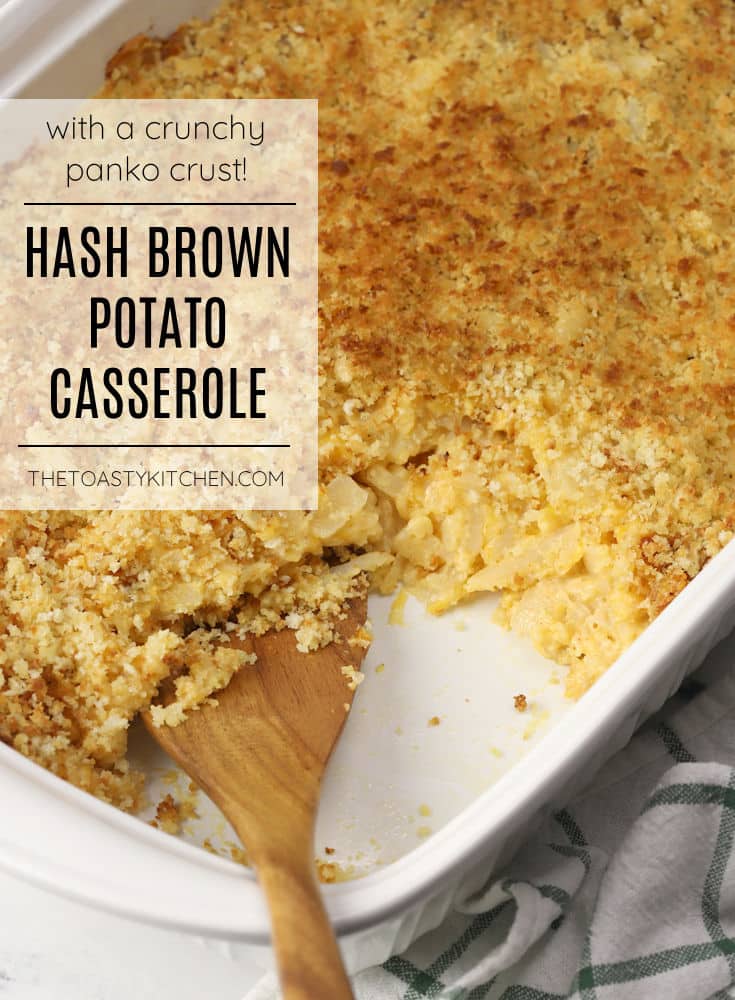 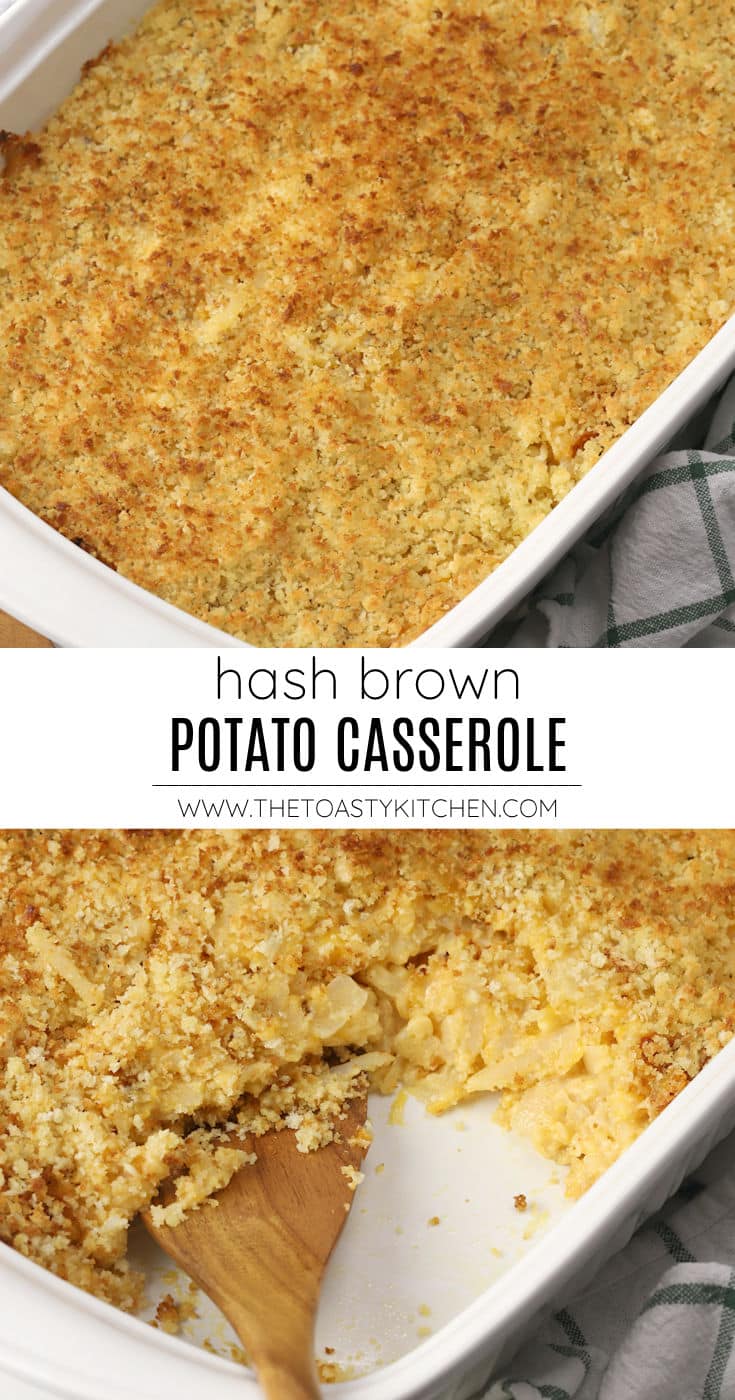 Hash brown potato casserole is made with cheesy potatoes and a crunchy panko bread crumb topping. The cheese sauce is made entirely from scratch - no canned soups needed! Perfect for serving at your next holiday gathering like Thanksgiving, Christmas, and Easter.

You may know hash brown potato casserole by its nickname - funeral potatoes. Hash brown casserole got this name because it was often brought to the homes of the bereaved after a funeral. It's comforting, easy to make, and keeps well for several days in the refrigerator. Plus, it can feed a crowd.

My version is made entirely from scratch using simple ingredients. No need for canned soups here! You'll start by browning onions in a pan on the stovetop, then making a simple roux. By adding milk and shredded cheese, you'll make a creamy cheese sauce for your shredded hash browns.

The panko bread crumb crust is arguably the best part. By using a combination of panko and melted butter, the topping browns up perfectly in the oven and makes a crunchy, buttery crust.

Serve hash brown potato casserole alongside a main course (like ham or turkey) at your next holiday meal. Hash brown casserole also makes a great side dish for big weeknight meals for the family.

Should I thaw hash browns for casserole?

Yes, your hash browns should be thawed before adding them to the casserole. Otherwise, ice crystals and liquid from the thawing potatoes can make your casserole watery.

To thaw your potatoes before assembling your casserole, place your bag of hash browns on the counter at least 30 minutes before starting the recipe. If they're very watery after thawing, drain them in a colander before adding to the cheese sauce.

Or, spread your frozen shredded hash browns into a thin layer on a sheet pan and place in a 300 degree oven for 5 to 10 minutes to thaw quickly. Make sure not to bake them too long - eventually they'll begin to cook.

Can I use fresh hash browns instead of frozen?

Yes, fresh hash browns (which you can find in the refrigerated section of the grocery store, or freshly shredded potatoes will work in this recipe.

To make your own hash browns from potatoes:

I like panko bread crumbs because they make a crispy, crunchy topping that adds a nice texture to the casserole.

However, panko bread crumbs can be substituted with crushed corn flakes (like old fashioned funeral potatoes), crushed butter crackers (like Ritz), or with traditional bread crumbs.

Optionally, top your baked casserole with a green garnish like fresh chopped parsley, green onions, or chives just before serving. This adds brightness and visual appeal to your finished dish.

Want to make your casserole ahead of time? Assemble as directed, but leave off your panko topping. Cover the casserole and refrigerate for 1-2 days.

When you're ready, set your casserole on the countertop while the oven preheats to help bring it to room temperature. Top with panko bread crumb topping and bake as directed.

Unfortunately, potatoes and dairy-based sauces do not freeze and thaw well, so I do not recommend freezing hash brown potato casserole. The texture of potatoes can get grainy when thawed, and cheese sauces can get watery and break.

Casserole leftovers will keep for 3-4 days in the refrigerator in a sealed container. 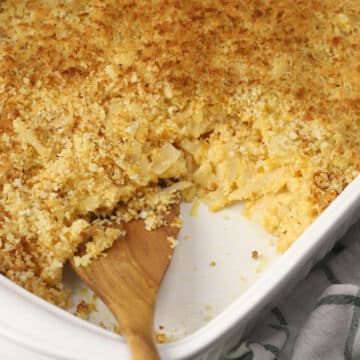